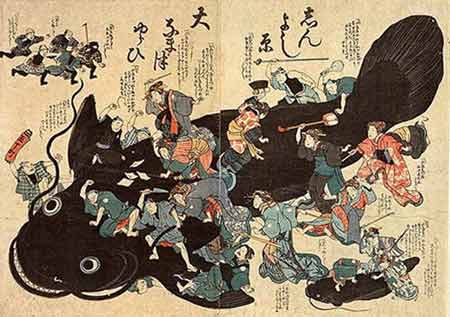 And so, in the continuing saga of the world, we have this installment: Onamazu.

Onamazu is the best explanation I’ve heard so far for why the earthquake and tsunami devastated Japan.

Onamazu is the giant catfish who lives in the mud under the sea. He slipped out of the hand of Kashima, the god responsible for controlling him. For as long as anyone can remember, according to Japanese mythology, whenever Onamazu gets away from Kashima the earth quakes and all hell breaks loose.

This analysis comes from my son, Benjamin, who is an artisan craftsman in Portland, Oregon. Ben and his fellow-artisan friend Ben Pederson do wildly elegant wood and metal work—cabinetry, furniture, custom lighting; material poems to the soul’s restless quest for beauty and function—exquisitely attentive/creative house remodeling, etc.

With their friend James Hedberg, a Ph.D. physicist (a St. John’s College schoolmate of son Ben), they were in the process of launching a new enterprise. They call it Qatalogue and intend it to become a unique outlet for the creations of artisans like them, an alternative to the common denominator, mass-produced, feebly dreamed faire of big box America.

And then the tsunami swamped Japan.

Like everyone else, Qatalogue’s founders were awestruck by the sea’s remorseless power. Like everyone else, they were swept away by the Internet’s tsunami images of the great wave. In their case, however, there came a particular aftershock, an inner tsunami of grief and compassion.

(Do you suppose this could be Onamazu’s real purpose, all demons being on some mission of the psyche?)

Anyway, inaction in the tsunami’s wake felt obscene to the Qatalogiers. (My son is an Action Jackson kind of guy. Has been all his young life.)

So the two Bens and Dr. James tried to figure out what they could do to help. They decided to capitalize on Ben P.’s training and background as a fine artist. (B.P. has been exhibited in a New York City art gallery, has collectors around the world, etc.) The Qatalogiers collaborated on the creation of three “art tee shirts”, imagery of which bobbed to the surface of their imaginations in the tsunami’s froth.

The Qatalogiers are giving all proceeds from the shirts’ sales to the Japan Red Cross. 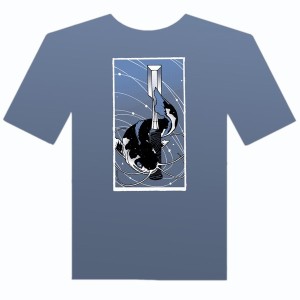 The image of one shirt portrays the rascal Onamazu himself, swimming sinuously around a chisel. (“The Japanese chisel is an exquisite tool, one of the simplest yet most refined devices on earth: it is the first item on the carpenter’s bench for re-building the temple.”)

Another features the delicate invocation of a chrysanthemum, “the order of its leaves like a three dimensional rendering of a piece of music, the great mind of Nature. This is the most revered plant in Japan (they have a holiday for it, Kiku no Sekku), it stands for order, cleanliness, divinity, peace…” 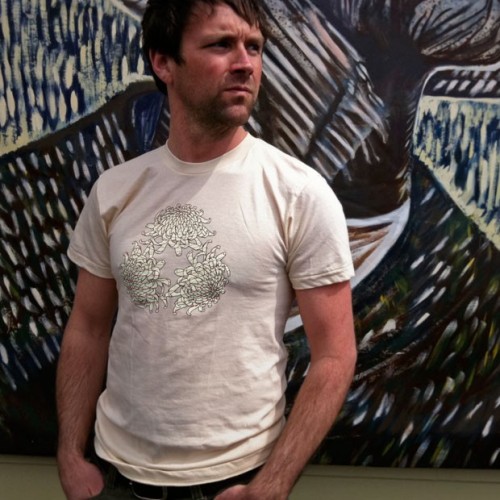 Finally, there’s the shirt depicting sacred cranes above the afflicted sea. (“And over those waters float 1,000 crimson cranes, a sign of our mutual understanding, compassion, and desire to offer a hand…”) 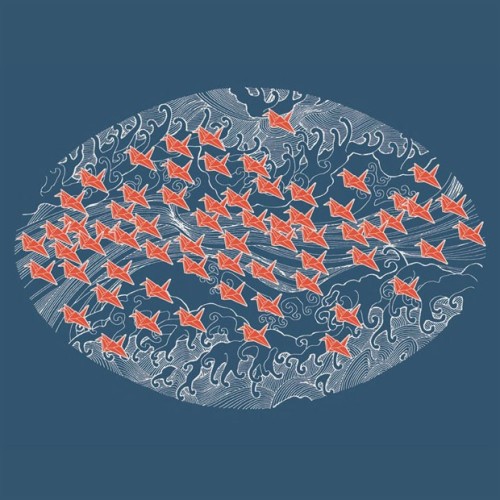 If you’d like to lend a hand, go here http://qatalogue.com/ and order a shirt. Order a bunch of them. Suggest your friends do the same. All proceeds go to Japan.

Speak chrysanthemum to tsunami. Let’s all do it together and raise a chorus that Onamazu can hear. And, yes, of course, Ben Shook’s old man was Qatalogue Customer #1.

A SONG OF MY SON

Here’s the rest of the story. Well, only a little part of it, really.

In the ever-expanding catalogue of my life’s joy’s and pleasures, watching my children go forth and add their stories to the world’s—and, so, edit the world’s story—is surely the greatest.

“What do you tell your children on cold winter night’s so they will wish for tomorrow?” Chief Seattle is supposed to have said.

Anyway, I always considered it a good question.My answer: the human spirit. It is not a human creation, and it is equal to the challenges of the rest of creation with which it must deal.

Am I saying I consider the human spirit a match for tsunamis, mercury contamination of the seas, the threat of nuclear Armageddon, yada, yada, yada?

My gut tells me the human spirit was created for the very briar patch in which it finds itself. I don’t see how it can be otherwise. Teleology 101.

Everything my three children have shown me with their lives so far reinforces that belief. The Qatalogiers’ creation of their tsunami shirts is merely the latest exhibit in my chain of evidence.

Standing at the foot of his mother’s birth bed, I was the first person to see Ben Shook come into the world. I swear the first thing I saw in his eyes was a twinkle. It has never left.

Ben was born, if not with a sense that the world was mad, at least that it was extremely interesting (see his posts about a fascinating assignment he had in the Canadian Arctic: http://benshook.com/words/?p=580), often amusingly so. He has been my hero all his life. (His two sisters, and the kids’ mother, are my heroines.)

Ben, for me, epitomizes ideal manhood. He is sweet, but formidable. He has a warm greeting and smile for everyone. But his spirit is a force.

A few years ago, a robber made the mistake of breaking into Ben’s home. When Ben discovered the intruder in his office, the intruder thought it would be a good idea to attack Ben with the wooden sword leaning against a wall.

That wasn’t a good idea.

I once met Ben’s kung fu sensei, a man who has trained government special operators and who conducts training all over the world. He  told me that Ben was freakishly gifted. The police easily tracked Ben’s assailant by the blood trail he left as he stumbled away. The police later told Ben that earlier that morning his assailant had attacked an old man with the victim’s cane. The old man lay in a coma for a long time. Had he died (he didn’t), Ben’s assailant would have been tried for murder, said the police. Ben’s assailant needed a prolonged hospital stay to recover from the wounds he suffered at Ben’s hands, and when he recovered he was sentenced to 12 years in a prison for the mentally ill.

Last summer a black bear charged Ben, his girlfriend and his younger sister as they hiked a grassy slope at Whistler Mountain, near Vancouver, B.C. Ben put the women behind him and stepped forward. (No one then knew it, but Ben’s sister was carrying his niece at the time. See “The Angel of Fukushima,” below.) Ben told me his mind calmly calculated a move that might let him get behind the bear and apply a choke-hold. Fortunately, it didn’t come to that. When it was about 50 feet away, the bear stopped, then ambled off. No, I don’t think my son scared the bear. I think the bear saw the twinkle in my son’s eye and figured the world needs that twinkle.

So what do you do in the face of a tsunami? If you’re Ben Shook, you create beauty, and offer it with love and a twinkle in your eye.

On top of everything else, Ben is a fearless musician. (Jonathan Richman, watch out.) Check out this virtuoso performance and see if you don’t agree. http://www.youtube.com/watch?v=GD5paU3odxs.

As I write this, I have this image of throngs of people wearing tsunami shirts, standing at the shores of the world’s oceans and serenading Onamazu: I was dancing in a lesbian bar, oh! (You have to watch the video to understand.)

And I can picture Onamazu being lulled to sleep by this gentle lullaby and the laughing hearts from which it comes.