AN UNUSUAL WORKSHOP will be held in Spokane, WA, May 20-22, 2011, aimed at healing the pandemic psychological injury that threatens humanity. The injury stems from what psychotherapists like Dr. Kent Hoffman, the workshop’s creator, call our “procedural memory.”

Procedural memory is a neurological process where the googolplex of life’s earliest experiences record themselves in the cellular explosion of the developing brain. This involves a molding of living tissue that subsequently shapes perception, governing every individual’s understanding of “reality.”

Neuroscience has discovered that the human brain contains 100 billion neurons. Neurons are living cells that think. Thought is an electro-chemical process that takes place in pulses of energy leaping across the synaptic gaps between the neurons. Each brain contains a galaxy of 100 trillion synapses. There are more possible synaptic interactions in every brain, neuroscientists now tell us, than there are molecules in the known universe.

Such discoveries bring a new view of human experience into focus. They suggest that every synaptic impulse not only molds the brain, but also serves as the microscopic headwaters of history.

From Hoffman’s perspective, the unthought known is actually a physical place where every one of us lives, a kind of cosmic hermitage.

“By the time we’re three years old, we’ve got a thousand trillion neural pathways established, all of which are experience-dependent,” says Dr. Hoffman. “The unthought known is well established by the time we’re eighteen months of age. And it pretty much drives our lives.”

Drives some of us right into a spiritual desert, he says, because it disconnects us from what truly is, the very Nature that produced us.

Hoffman calls his workshop “Thirst,” because it addresses what he has found to be the only way out of this desert. The passage: a “sacred practice” of daily meditation that leads beyond the confusion of words, even words like the ones he uses to point to the way.

Here, then, is humanity’s sublingual plotline, suggests Hoffman. It’s where the story of us comes from—symphonies and mall shootings, poems and nuclear weapons. But it is a story without words. It takes a journey without words to escape its lonely illusion.

Hoffman’s Thirst workshop emerges from a project he and two of his colleagues, Bert Powell and Glen Cooper, launched more than a decade ago. Partners in the Marycliff Institute of Spokane, the three therapists wanted a way to bring greater leverage to their efforts at assisting with psychological healing than working with single clients.

They seized on the large body of research known as “attachment theory,” which addresses the profound role played by early childhood and effective parenting in the mental health of individuals and the civilization they form.

The Marycliff clinicians called their project “Circle of Security.” (See “4-million-yr.-old genius“.) A decade after its launch, it has become something of an international phenomenon. These days the three therapists lecture all over the world on the subject of building the kind of psychological security in babies and children that can—much more than merely reducing the need for psychotherapy later in life—greatly add to life’s satisfaction and joy.

The heart of the matter is what they call a “secure base/safe haven.” Such a psychological foundation is achieved, they say, by recognizing the extreme thirst for it that all infants and children have, and the latent genius parents have to slake that thirst—even parents whose own needs weren’t met early in life. 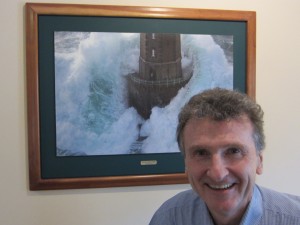 On his office wall, in order to illustrate what a secure base/safe haven means, Powell displays the famous Jean Guichard photograph of a monstrous wave engulfing a Brittany lighthouse. The great wave represents life’s unavoidable storms, says Powell. The lighthouse represents the healthy psyche’s ability to withstand them.

The whole purpose of therapy, says Powell, is to build that kind of secure base/safe haven later in life if a fortunate childhood didn’t create it for you. The world will become a kinder and gentler place the more common such personal safe havens become, says the Marycliff team. (Note the tiny figure of the lighthouse keeper standing in the door, a secure soul in the maw of a killer wave.)

For his part, Hoffman believes that the only real hope humanity has of achieving peace and avoiding self-annihilation is spreading the “circle of security” as widely and rapidly as possible. He likes to quote Gandhi: “If we want to reach real peace in the world, we shall have to begin with the children.”

But how do parents whose unthought known does not include the arts of peace teach peace? That’s the catch, says Hoffman, and the reason he has launched his new Thirst workshop.

Humanity’s hope, says Hoffman, is its yearning–and willingness to act on it.

“I’m doing this for those of us, me included, who are ‘still crazy after all these years.’”

Hoffman also likes to quote Selma Fraiberg, whom he calls “the mother of the infant mental health movement.”

Said Fraiberg, “The mending of children’s lives is a very large part of the work of our profession, and it would be folly to say that all childhood disturbances of personality can be prevented.  Even in utopia, I think the child therapists will have waiting lists. But a large number of the disorders of personality that I have seen could have been prevented.  And these, in nearly every case, have been disturbances in the primary human relationships during the early months and years of life.”

As did both of his colleagues—Powell and Cooper—Hoffman had what he considers a traumatic childhood. He emphasizes that he and his colleagues have “built a firewall” between their highly scientific protocol and the spiritual practices Hoffman is about to teach in Thirst. Hoffman says that for him personally, however, science and spirituality are one.

“The meditation practices I’m about to share are what keep me sane,” he says.

When Your “Holding Environment” Holds

“None of us do well without a holding environment. None of us,” Hoffman says in his Daily Practice 1. (http://www.thirsthome.org/#!resources)

A holding environment is the secure base/safe haven that the attachment school of psychology is all about.

When I first came across that notion more than a decade ago, I instantly flashed back on an experience I had in Vietnam. This is how the brain processes information—it screams through the archives of personal experience to see if the new data fit any of its schema, its frames of reference.

The frame of reference for me in this case was my helicopter company’s bunker during the Tet Offensive at Bien Hoa. VC and NVA rocketeers were trying to erase us. Their big 122 mm Russian rockets and mortars rained down, making a noise that caused me to picture giants slamming doors in the sky that were as big as the whole sky. The ground jumped and the earth shook.

Guys in the darkness around me cried for their mothers. Literally.

I recognized some of the voices belonged to big, tough guys. Guys “I wouldn’t have messed with with a shotgun,” as the saying goes.

Two unforgettable things happened for me in that moment. First, a calm voice in my head said, “This is hard. If you get through this, nothing will ever be hard again.” After that thought registered, the voice then said: “Damn, Larry, you’re like a cat. You always land on your feet.”

Then the second thing happened. I remembered my mother, and her mother, and my mother’s older sister, my beloved aunt. I remembered them reflexively. In that instant, with sand sifting over me in the darkness from explosions that were hunting me, these women were with me. They were with me because they’re always in me. These women had loved me as though I were royalty. Without my ever even thinking about it until that moment—obviously part of my unthought known—they made me feel special and safe.

The thing is, these women had known very hard lives, hadn’t had much of a “holding environment” themselves. At least one of them, as I learned only last month, was raped when she was 16 years old.

As I sat there in that bunker, the world around me sounding as though it were ending, I knew the field phone on the bunker wall would ring and my helicopter gunship team would get scrambled and we would take off through the barrage and address our attackers. And I lusted for that to happen. And it did.

And the whole while, not knowing from one second to the next if I would still be alive, I understood that the fire breather who lives inside me doesn’t mean I’m tougher or braver than anyone else; indeed, I know for certain that I’m not. It means, instead, that I get to live with my own protective dragon because three women who didn’t have a dragon of their own installed this fierce love-fed beast in me.

More than 30 years passed before I told anyone about my bunker experience. The man I told, Garve Brakel, IT director for the City of Spokane, had been a platoon leader in Vietnam.

“What I remember about guys who died in my command,” he told me, “is that their heads were shaved, their faces were dirty, and they cried for their mothers.”

That thirst for mother, says Hoffman, and the ability of mother to be sustained and found again and again through all life’s breakage is what his work is about.

Except, it’s really not mother, per sé, that we’re looking for, he says. “We’re searching for original holding, which can be mother or father in human form.”

This is the subject of a poignant two-minute Singapore TV commercial that an audience member shared with Hoffman after a presentation he recently made in Australia. (http://www.youtube.com/watch?v=WgyW0EYpf5U.)

“Thirst is proof of water,” Hoffman quotes a Sufi wisdom saying. The emotions triggered by the Singapore video contain a similar proof that “original holding” exists, he says.

For information about quenching your thirst, go here: http://www.thirsthome.org/. If you know others who are thirsty you might suggest they do the same.

2 responses to “Quenching the Parched Soul”