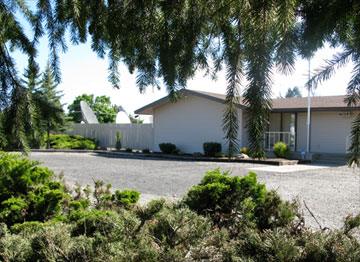 KTW is a tiny radio station disguised as a suburban rancher, hiding behind some shrubs in a quiet Spokane South Hill neighborhood. It would be hard to find a more unpretentious citadel of free speech. 30 Rock it ain’t. I knew the station when my family and I first moved to Spokane, in 1976, as KEZE. “Easy Listening” KEZE.

The listening at KTW yesterday, when I recorded a four-part interview series for a show called “The RIGHT Spokane Perspective with George and Mike” was not easy.

In fact, it is a sign of our strange times that what I had to say could actually be considered “seditious.”

The third definition of sedition in my Oxford English Dictionary: “Conduct or language inciting people to rebellion or a breach of public order; agitation against the constituted authority of a State.”

This is where journalists the world over can find themselves on thin ice. What happens if government is taken over by religious fanatics for whom beheading and suicide bombing are acceptable forms of spiritual discourse? Or tyrants who look upon salt mines and prisons as appropriate curbs on “agitation?” Or drug lords who think of automatic weapons as a good way to drive home a point?

Less dramatically, and closer to home—too close for comfort to the studios of KTW: what happens if organized crime successfully subverts government so that you have government itself violating the laws that government is bound to uphold? Are those advocating an end to the inherent disorder of lawlessness seditious because they advocate disrupting the disorder and restoring the order of lawful conduct?

That’s not a trick question.

My act of sedition was to talk as plainly as I know how about the evidence suggesting that Spokane’s Cowles family has used its media to corrupt government all the way from Spokane City Hall to the White House. The purpose of my seditious words was to serve as a trail of breadcrumbs leading to the evidence on this Web site, and at www.camasmagazine.com and www.girlfromhotsprings.com suggesting that the Cowles family’s conduct satisfies the legal definition of organized crime and that its criminal activities led directly to the death of an innocent citizen.

For years now, having Tim Connor or me on a Spokane, WA, radio show to talk about this stuff has not been the best programming move. (Tim, a longtime colleague of mine, is the communication director of the Center for Justice and former senior editor of Camas Magazine.) The two of us, sad to say, have a nasty habit of getting shows killed for having the cheek to talk about our reporting on RPS and the Cowleses. For many characters in the Inland Northwest, including characters in the region’s media, speaking the words River Park Square or Cowles family is like uttering the name Voldemort for characters in J.K. Rowling’s Harry Potter novels.

For a colorful summary of the not-so-quaint history of what happens to journalists in this region who have reported on the Cowles family’s River Park Square “public/private partnership” see Tim’s story “The Kibosh” on the Center for Justice website. Also see his poignant, “Requiem for a Reporter,” at the Camas site. That story describes the spectacularly bad judgment Tom Grant showed by winning the nation’s top broadcast journalism award for his RPS reporting.

A caveat: I may have discerned a certain, er, ideological bent at KTW Radio. I picked it up, for instance, on the slogans of the tee shirts worn by my hosts, George McGrath and Mike Fagan. I think I saw the image of a Minuteman, but I can’t be sure. Was there something about a “Tea Party,” “Patriots” “Liberty?” Maybe; I’m really not sure, and not that there’s anything wrong with  those words, freighted though they can be in these edgy times. In all honesty, I tend to get tunnel vision when I try to hack my way through the jungle of RPS. In any case, whatever ideological bent KTW Radio might have (if it has one at all) doesn’t matter to me. What matters to me is getting the facts straight. I am grateful to Mr. McGrath and Mr. Fagan for the courtesy they showed me and for their attempt to assist in getting out facts about public life in this neck of the woods that are hard to get out.

I congratulated my hosts for their courage in pursuing this story, although I hope to goodness I had the wits to do no such thing on the air. The last time I was foolish enough to congratulate radio show hosts—it was Mark Fuhrman and Rebecca Mack—they were gone before you could say “River Park Square.” Their old show? It was soon being broadcast under the aegis of Cowles Publishing. Just coincidence, I’m sure.

Which brings me to my investment tip. You might contact KTW and start snatching up whatever memorabilia they have to sell. It might not be around much longer, and you know how scarcity drives up prices. (I wish I still had my old Bobby Thompson and Dusty Rhodes baseball cards.)