Letter From The VA Death Camp 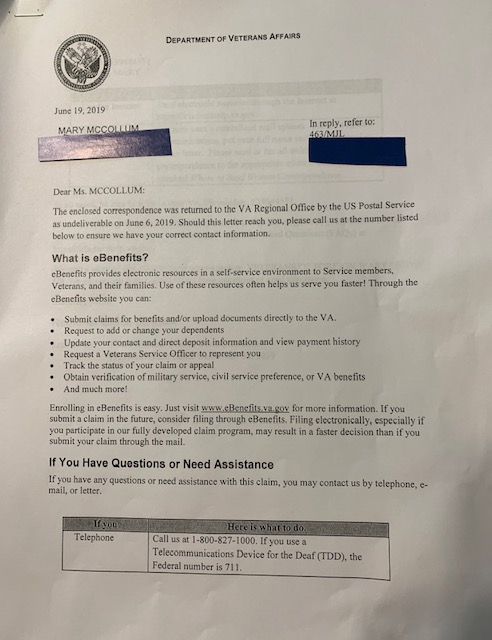 Navy Rape Survivor Mary Kay McCollum received the above letter yesterday, June 22, 2019. It informed her that she had missed her benefits hearing before a Veterans Law Judge of the VA’s Board of Veterans Appeals. The hearing was scheduled for June 10 in Washington, DC.

This is how the VA clears injured veterans like McCollum from government benefit rolls. It’s how VA saves American taxpayers from the actual costs of military service and war. It’s the kind of crime lawless insurance companies commit when they fraudulently deny claims. This is why the VA has the blood on its hands of the thousands of American veterans who commit suicide every year.

Here’s the deal. It’s not complicated: the business of the military is war. War is organized violence. Violence, if it doesn’t kill and maim the body, physically wounds the brain. Like an ice cube bullet, it leaves the hidden physical injury that cripples McCollum: PTSD.

McCollum’s injury is such an ordinary consequence of military service that in 2007 Congressional testimony Penny Coleman put the blame for America’s military suicide epidemic on cold hearted government policy that intentionally covers up inarguable truth: military trauma often does central nervous system damage that makes normal human function impossible and life itself not worth living. That’s why we shouldn’t call the self-murders of our veterans “suicide,” Coleman testified. Their deaths are more like “executions” or “euthanasia.”

Translation: America’s military suicide epidemic is more like the industrialized extermination of the Nazi death camps than the random casualties of war.

The ugly facts embedded in the letter McCollum received yesterday expose why. Those facts amount to nothing less than an indictment of the VA for mass murder.

The facts in McCollum’s case show why there are actually two VA medical systems. There’s the VA that provides largely very good physical health care. And there’s the VA mental health system that denies the holocaust of PTSD.

If you can spare five minutes, here’s McCollum summarizing her experience in her own words.

If you want the hard evidence in McCollum’s case you can find it in The Strange Fruit of America’s Veterans, VA Continues “Institutional Rape” of Navy Veteran, The VA’s High Crime,  and Raping Mary Kay.

* The Navy discharged McCollum in 1983 because her sexual assaults and serial rapes by superior officers destroyed her mental health. McCollum’s serial rapist was convicted at Court Martial. Under the VA’s March 2016 Military Sexual Trauma Disability Compensation Guidelines this proves that McCollum has been as disabled by her military service as if she had lost a limb in the 1983 terrorist bombing of the Marine Corp barracks in Beirut. Under VA rules she has been entitled to disability compensation since then.

* In 2004 a VA mental health counselor diagnosed McCollum with PTSD, told her she was qualified for benefits, suggested she file for them. She did.

* In 2005 VA denied McCollum’s claim, writing her what she called her “slut letter,” blaming her rapes on her.

* Some eight years later a second VA mental health counselor also diagnosed McCollum with PTSD and urged her to appeal the VA’s 2005 denial.

* 2014, after a year of no action, VA admitted it had lost McCollum’s appeal. She submitted another appeal.

* 2015, VA admits its 2005 denial was wrong, awards McCollum 50% disability, but ignores evidence of her 100% disability. That evidence, again, is that the Navy discharged McCollum in 1983 precisely because her mental health was totally destroyed by her Military Sexual Trauma. McCollum appealed again.

* 2017, VA finally admits McCollum’s total disability and awards her a 100% rating. However, violating its own compensation guidelines and federal law, it rules her total disability didn’t begin until 2016.

* 2017, with the help of her Veterans of Foreign Wars Service Officer, McCollum submits two more appeals, asking that her benefits award obey the law and be properly backdated to 1983. Again, under VA guidelines and federal law, that is the date established by her Navy discharge because her Navy rapes left her totally disabled.

* January 2018, again with the help of her VFW Service Officer, McCollum appeals to the Veterans’ Board of Appeals to expedite her case. At this point, she has been lost in the VA system for 14 years since she first applied for benefits.

* March 19, 2018, McCollum’s VFW Veteran Service Officer, Will Sampson, requests that she be granted a live videoconference before the Board of Appeals to avoid having her travel to Washington, D.C. to testify.

* April 2019, 13 months after asking to advance her case on the Board of Appeals docket, McCollum receives a letter from K. Osborne, the Board of Appeals Deputy Vice Chairman. “In compliance with this action,” Osborne writes, “the Board will take prompt action to issue a decision in this case. You will receive a copy of the Board’s decision as soon as it is issued.”

* Yesterday, June 22, 2019, McCollum receives a packet of letters from the VA telling her that it has been trying to contact her since May 7, 2019, informing her of her scheduled June 10, 2019 hearing in D.C. The letters are dated, May 7, May 30, and June 19. All were sent to the same address. The June 19 letter, with the earlier delinquent correspondence included, reached her yesterday, on June 22. The May 30 letter informs McCollum that the May 7 letter was returned on May 14 to the VA by the US Postal Service. The May 30 letter informs her: “The above address has since been discovered.” That makes no sense, because all of the addresses are the same. There is no explanation for why only the June 19 letter came through. There is no explanation for why the VA made no other attempt to contact McCollum regarding her scheduled June 10 hearing. The May 7 letter states: “If you fail to appear for your scheduled hearing and no request for postponement has been received or granted, your case will be processed as though your request for a hearing had been withdrawn. No further requests for a hearing will be granted in the same appeal…”

There you have a scene from the VA theater of the absurd that causes veterans to blow their brains out in VA hospital parking lots.

I find it interesting that during the time McCollum has been lost in VA’s PTSD gulag, Board of Veterans Appeals Deputy Vice Chairman Kimberly E.H. Osborne has been a highly compensated attorney in the system. In 2015, for instance, a year that found McCollum homeless and living in her car, Osborne’s salary was $182,107; she earned a bonus of $2,784 that year.

I just can’t escape Penny Coleman’s conclusion. To me, what those numbers add up to is that Osborne and her VA colleagues are being paid to kill America’s service members. They’re part of the final solution of military suicide to bury the truth that military service destroys mental health.

Look at it this way. At the conservative veteran suicide rate of 20 per day, in the 15 years that McCollum has been waiting for the VA to obey the law and properly compensate her for her PTSD, 109,500 American service members have been “executed” or “euthanized” by suicide. And all that time a grateful nation has been chanting: “Thank you for your service.”

In the 13 months alone that have elapsed between the time McCollum asked that her case be “advanced” on the Board of Appeals docket and the time that Osborne informed her it would be, only God knows how many veterans and active duty service people have committed suicide.

Again, accepting VA’s questionable lipstick-on-corpses suicide body count, that means about 7,800 military suicides while McCollum has been waiting on Osborne to make good on her promise to “expedite” a decision on her case. There’s simply no way to avoid the conclusion that U.S. military service, and the VA bureaucracy that covers up its true hazards, are orders of magnitude deadlier to our defenders than the “enemies” we send them to fight.

8 responses to “Letter From The VA Death Camp”