Fire and Fraud in Spokane

IN THE FALL OF 2009, Spokane’s taxpayers were asked to swallow a motherhood and apple pie piece of municipal finance. It was a fire bond levy. Who could be against something as good for you as fire protection?

Just enough people, it turned out, to defeat the bond at the last minute. Right up until the vote, polls showed the measure passing easily. But suddenly naysayers materialized and narrowly killed it at the last minute? Why?

I don’t know, but Bill Jackman, a lieutenant on the Spokane Fire Department, phoned me with his theory.

“I think it was that email you sent around,” he said. “It had to be. We all thought the measure was going to pass easily.”

I circulated the email in question because of information provided to me by Jackman, retired Spokane Airport fireman Rich Magney, and former Pend Oreille County Sheriff Tony Bamonte. All three had become experts on the massive financial corruption embedded in Spokane’s fire service that revolves around the fraudulent billing practices of American Medical Response. AMR is the company that operates Spokane’s ambulances. Lt. Jackman stumbled across AMR’s funny billing while working as an SFD emergency medical technician.

That discovery contributed to a class action law suit against AMR that is still underway. Sheriff Bamonte is one of that suit’s plaintiffs.

During the mayoral administration of Dennis Hession, AMR got caught gouging Spokane’s ambulance users to such an extent, Jackman, Magney and Bamonte had informed me, that the city was entitled to levy fines of $80 million against the company. Instead, Hession fined the company a tenth of a percent of that amount, $80,000.

That outraged Jackman, Magney, Bamonte and others familiar with AMR’s practices, because it signaled the company that its fraud paid handsomely.

(Assuming you needed discouraging, which fine would better discourage you from speeding through, say, a school zone during school hours: $200 or 20¢?)

But not only is the fraud with which AMR infects Spokane’s fire service a fiscal rip-off, it’s a physical killer, note emergency medical technicians Jackman and Magney. They cite a study comparing emergency ambulance services in Seattle and Spokane. The survival rate for “code call” emergencies in Seattle is 45%, they say. In Spokane, it is 8%.

Code calls mean “somebody has just dropped down to the ground, unconscious, not breathing,” explains Magney.

That means Spokane’s citizens are being charged usurious rates for lethal ambulance service.

But that’s not all, Magney told me. The present EMS Levy is needed to preserve the “system status management” of the city’s contract with AMR. This status quo, he says, permits AMR to inadequately staff to handle Spokane’s medical emergencies as they actually occur. Because of that, he says, every time someone calls for an ambulance in Spokane, the first thing that happens is the Spokane Fire Department dispatches SFD paramedics in SFD fire trucks valued at between half-a-million and a million dollars.

The big rigs—“some of them weigh as much as loaded logging trucks,” says Magney—go rumbling through our neighborhoods, sirens often blaring, making a great show of responsiveness. But it’s a fake, says Magney. Because Spokane’s firemen just stand around until inadequately staffed and equipped AMR arrives to care for the patient. Keeping its overhead down really helps AMR’s bottom line, says Magney.

Anyway, this squanders what EMT Magney calls the “golden hour” of survival. This is why Spokane’s medical emergency survival rate is a fraction of Seattle’s, he says.

This is also why we’re wearing out our fire trucks, say Magney and Jackman. And that, say Magney, Jackman and Bamonte, is why the city needs Spokane’s good citizens to plunk down the money for that little item called “Proposition No. 1 City of Spokane EMS—Emergency Medical Services Levy” in the ballot they just received. (Election Day is April 27.)

This is fraud, pure and simple, says Magney. Not only is it unrelated to caring for Spokane’s residents, its purpose is to continue preying on them. The city refuses to investigate this crime, he says. Any reasonably competent criminal investigator would quickly uncover it. It wouldn’t take someone with the credentials of Sheriff Bamonte, he says.

For his part, Bamonte says Spokane’s AMR/EMS fraud is just part of the community’s deeper problem of organized crime involving a small inner circle of “players” and a bigger outer circle of public officials.

“All this stuff is being hidden from the public,” Magney told me.

I find this “stuff” interesting, don’t you? I think you’re entitled to know about it, don’t you?

In the world of journalism—at least my world of journalism—knowledgeable people with information valuable to the public are known as credible sources. So last fall, I shared the perspective of these particular sources with those on my email list. I have a pretty big list, but many of the people on it, I know, maintain lists that dwarf mine. Compare the size of the Sun to the Earth. That’s what we’re talking about.

But that’s not the most interesting part. Many of the recipients of my emails tell me they send some of my stuff around. This is where things get weird, because to understand what that can mean you have to start reaching for astronomical comparisons. Now you have to start comparing the size of the Sun to the size of Antares, the fifteenth brightest star in the sky. (On my computer screen, Antares is the size of the palm of my hand and the Sun, at one pixel, is too small to see.)

Next, to understand leverage in the digital world, you have to compare the size of Antares to the size of  Earth. Mustard seeds and mountains ain’t in it. Google these comparisons to see what I’m talking about. It’s crazy.

So, yes, in a way, my 15 friends and I are just two steps away, potentially (everything in life is just potential until we act), from 26 million others.  This is why so many people are having so much fun with “viral media” on the Internet. Check this out: http://www.youtube.com/watch?v=5YGc4zOqozo.

Plenty of people are saying this is the most important communications revolution since Mr. Guttenberg invented his printing press. My guess: it’s way more important because of that mountain/mustard seed business.

“Hello, Antares? This is Earth. Can you hear me? Well, no it’s just me, Larry. Yeah, the guy whose wife spends all that money feeding the squirrels. What? I don’t know, she just likes them. Can you still hear me?”

So, anyway, I have no idea if Lt. Jackman is right, that my little email last fall led to the defeat of the fire levy. But, if you live in Spokane, you’ve probably seen all those red signs around town asking for you to support Prop 1, this new EMS Levy. The levy is needed, say proponents, to preserve Spokane’s emergency medical services. It’s really needed now, because you didn’t pass the fire levy last fall. That’s their story. And if you don’t pass the EMS Levy, Spokane Fire Chief Bobby Williams has warned, he will have to lay off about a third of the city’s firemen.

Well, what about this levy? People started asking me. I don’t know, I said. I’ll check with my sources. 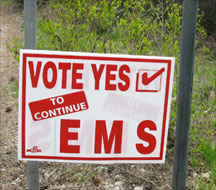 Is it wise to vote yes?

Rich Magney said he’s not voting for it, because the fiscal emergency requiring it results directly from the River Park Square fraud. If you vote for the levy, he says, you’re just paying the ransom on the public corruption that’s already charging you an arm and leg for lousy service.

Sheriff Bamonte’s not supporting it for the same reason. Last week he filed a complaint with U.S. Attorney General Eric Holder asking him to initiate a federal grand jury investigation into Spokane’s public corruption. In that complaint—I’ll be reporting on it soon on the Web site below—the ex-sheriff cites 155 exhibits of evidence showing that, among other things, the River Park Square fraud has stolen at least $87 million from Spokane’s taxpayers. That theft, he charges, also led directly to the April 8, 2006, death of a woman in the RPS parking garage. (See “Death by Parking” at www.girlfromhotsprings.com.)

“The easiest way for Spokane to solve its fiscal crisis is to make Betsy Cowles pay back the $87 million her family stole from the city,” said the former sheriff.

Lt. Jackman’s response was the one that surprised me. He told me he was reluctantly supporting the levy.

“What we have in this ballot measure is nothing less than a hostage situation,” he wrote me in an email. “The perpetrators of the past over-billing fraud are using 70-80 innocent, young firefighter jobs as a human shield for their past acts of malfeasance.

“To vote against this levy will only kill the hostages (firefighters) and will have absolutely no effect on the hostage takers (public officials).  The loss of these 70-80 positions will have a drastic negative impact on public safety.  Preventable out-of-hospital deaths will rise with the demise of EMS.”

(You mean Spokane’s ambulance service will get even worse? Yikes!)

Jackman told me that what really sickens him is that the youngest firefighters are the ones who will lose their jobs. “That’s the future of fire protection in Spokane,” he said.

I asked Magney and Bamonte their views on Jackman’s position.

“I think they’re going to lay off those firemen anyway,” said Magney. “The size of the RPS fraud is far too great for this levy to cover.”

Sheriff Bamonte has the sober attitude that enabled him to solve the nation’s oldest open murder case. He just doesn’t like criminals, public officials or not, policemen or not, media/real estate barons or not. (Read the book about him, Breaking Blue, at http://www.amazon.com/Breaking-Blue-Timothy-Egan/dp/1570614296/ref=sr_1_1?ie=UTF8&s=books&qid=1271082771&sr=1-1.)

Bamonte’s developing class action and civil RICO litigation to recover the fraud. Loss of firefighter positions will document citizen losses caused by the fraud, he says.

“I intend to legally pursue every public official complicit in this fraud,” he says.

Anyway, now you know as much as I know about where Jackman, Magney and Bamonte stand on Prop 1.

If you’d like to hear Magney and Jackman explain in their own words what’s wrong with Spokane’s fire service, contact the radio station KTRW in Spokane at http://www.ktrw.com. Ask for a CD of the shows that the firemen recorded on 2/12/10 on “The RIGHT Spokane Perspective with George and Mike” show.

If you like fooling around with mustard seeds and mountains, you can share this blog with others. Meanwhile, I just said a little prayer that you and your loved ones don’t need an ambulance in Spokane. Please do the same for me. Thanks.

17 responses to “Fire and Fraud in Spokane”